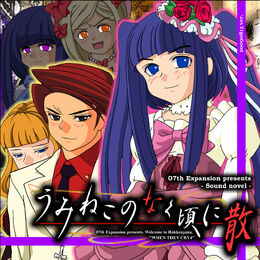 Dawn of the Golden Witch

End of the Golden Witch is the first installment of Umineko no Naku Koro ni Chiru, and the fifth arc of the overall story. It was released at Comiket 76 on August 15, 2009.

Good morning.
Please enjoy this new game by a new Game Master at your leisure.

However, the game has already reached a climax.
The culprit has been cornered, and there's nothing left to do but await the final checkmate.
But for that very reason, there must be something for you to spot looking down on it from afar.

The difficulty is fairly easy.
What could possibly deceive you after all this time...?

In this episode, Lambdadelta takes over as game master following Beatrice's defeat at the end of the previous arc. Another witch, Bernkastel, takes primary control of the human side in the game. She introduces the detective Erika Furudo, a new visitor to the island who approaches the murders from a "mystery" perspective, in contrast to Battler's "anti-fantasy" stance. The chapter also has a focus on Natsuhi, who receives threatening phone calls from a "Man from 19 Years Ago".

Retrieved from "https://umineko.fandom.com/wiki/End_of_the_Golden_Witch?oldid=40512"
Community content is available under CC-BY-SA unless otherwise noted.