Dawn of the Golden Witch 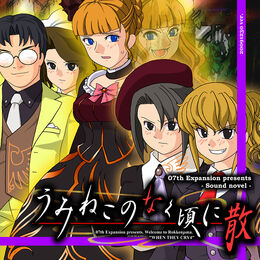 Dawn of the Golden Witch is the second installment of Umineko no Naku Koro ni Chiru, and the sixth arc of the overall story. It was released at Comiket 77 on December 30, 2009.

Good morning.
Now the curtain shall finally arise on a game presented by that Battler-sama.

Will Battler-sama manage to successfully and spectacularly fill the enormous role of Game Master?
Let us bear witness to this fight from the opposite side of the chessboard.

Having become the new game master at the end of End of the Golden Witch, Battler is tasked with the creation of his own gameboard as a way of demonstrating his understanding of Beatrice's game. Beatrice is also reborn, but lacks the memories of the original and possesses a timid personality. Battler's game has a focus on the couples George and Shannon, and Jessica and Kanon, who participate in "Love Trials" to determine which of their relationships will succeed. Chick Beatrice joins these trials as part of her quest to discover who she once was, and Erika takes on Battler's game. Alongside these events, Ange reads a manuscript by the mysterious forger Tohya Hachijo, the author of the tales of the third to sixth games.

Retrieved from "https://umineko.fandom.com/wiki/Dawn_of_the_Golden_Witch?oldid=35950"
Community content is available under CC-BY-SA unless otherwise noted.