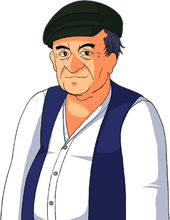 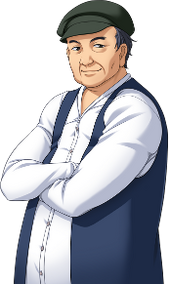 |title =None |age =Unknown |gender =Male |fantasy_race =Human |eye color =Black |hair color =Gray |game =Alliance of the Golden Witch |japanese =Daisuke Matsuoka}} Kawabata (川畑, Kawabata?) is the captain of the speedboat that went to and from Rokkenjima. He is the one who takes Ange to Rokkenjima.

Kawabata is the captain of a high-speed boat that sends the Ushiromiya family to Rokkenjima back and forth. After the murder incident on Rokkenjima, Kawabata held himself partially responsible for being unable to pick up the family sooner, in spite of the typhoon that otherwise prevented him from doing so.

In 1998, he agrees to bring Ange to Rokkenjima in the hopes of finding closure.

In the trick end, is killed by Ange, thinking he was intenting to kill her.

Retrieved from "https://umineko.fandom.com/wiki/Captain_Kawabata?oldid=36630"
Community content is available under CC-BY-SA unless otherwise noted.