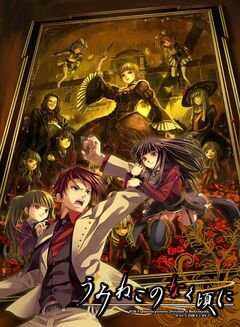 Banquet of the Golden Witch

Good morning. How shocking that you haven't been forced to surrender even now.
By this point, even I am forced to expect a lot from you.

Not all of the game takes place on the board.
How about taking a little peek on the outside this time around?
They say that if you know your enemy, you need not fight a hundred battles.

The difficulty level depends on you.
The manner in which you've fought until now will greatly influence the difficulty of this game.

This chapter introduces Battler's sister Ange as a secondary protagonist, who was absent from the 1986 Ushiromiya family conference and was taken in by Eva, the only survivor of the Rokkenjima Massacre. The narrative shifts between the gameboard and the outside world, showing readers the impact of the incident on Ange's life and exploring her relationship with Maria and magic through Maria's diary.

Retrieved from "https://umineko.fandom.com/wiki/Alliance_of_the_Golden_Witch?oldid=37180"
Community content is available under CC-BY-SA unless otherwise noted.